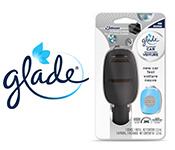 Average member rating:
(9,433 votes!)
Adjustable fragrance to customize your drive. The exclusive Glade® PlugIns® Car fragrances will provide you with up to 60 days of driving enjoyment*. Explore the variety of fragrances to elevate your mood and drive. Glade® PlugIns® Car only works when the car is running, and a glow indicates when the product is working.

ADVENTURE. WE HAVE A FRAGRANCE FOR THAT

*The refill will last up to 60 days based on 4 hours of driving per day on low setting and ambient temperature conditions. When the fragrance vanishes, replace it with a new fresh refill. Enjoy the ride!