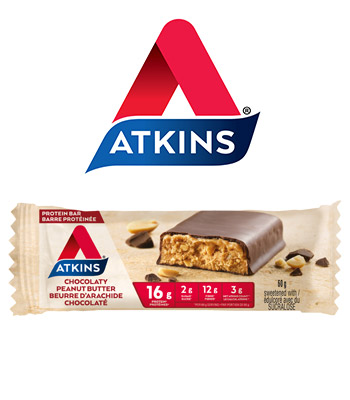 Average member rating:
(5,399 votes!)
Atkins® is committed to bringing you delicious products that fit your lifestyle.

Our products have always been made with quality protein and a Net Atkins Count™ of 5 g or less per serving.

Our improved products now also have a shorter, simpler ingredient label that is easier to read and understand while featuring the same great taste and nutrition that you expect from Atkins.

Atkins Chocolaty Peanut Butter Protein Bars are made without artificial colours, contain 0 g sugar alcohols and are made with real roasted peanuts and creamy peanut butter wrapped in a smooth chocolaty coating.