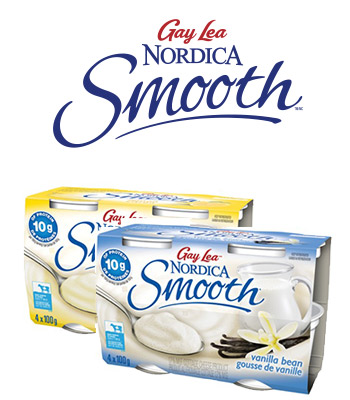 There’s no lumps – it’s smooth and creamy like a Greek yogurt, but it packs way more protein – over 25% more in fact. Try new Blueberry Acai, or grab Vanilla Bean or Lemon for an on-the-go snack that’s protein-packed. Or try Smooth Plain: with no added sugar, it’s the perfect (and healthy) ingredient to complete your favourite recipes – smoothies, sauces, savoury dishes, the possibilities are endless!

All Nordica Smooth is made unimaginably smooth and delicious with only 100% Canadian milk, no artificial colours and no artificial flavours.